This memorial pine tree commemorates Maroochy Shire’s part in the bicentennial Chain of Beacons.  It was planted in the ashes of Maroochy’s Beacon which was lit at 5.50a.m. on Sunday June 19 1988 –a link in the largest chain of beacons in world history, which commenced at sunset at Botany Bay, encircled Australia and returned to Botany Bay at sunrise the following day.

Located at the southern most beach access 168 below Buderim Avenue, this memorial was unveiled on 7th April 2001.  The monument recognizes the enormous contribution by the war dogs that saved countless soldiers lives in Vietnam. The Australian War Dog Memorial, complete with carved statue and a drinking trough for dogs, highlights their importance and rightful place in Australian military history, with campaign contributions being recognised in Vietnam, Somalia, Papua New Guinea and elsewhere. 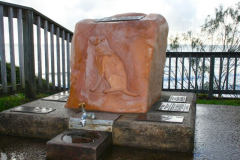 This Cairn was erected by the Mooloolaba Alexandra Headland Progress Association on May 17th 1970.  Dedicated to the navigation skills of Captain Cook, who sailed past the Headland in The Discovery on his voyage to chart the eastern coast of Australia.   Small kids playground adjacent.

On Sunday 31st July 2005 the ex-HMAS Brisbane was scuttled off the coast of Alexandra Headland to create an artificial reef, now known as the ex-HMAS Brisbane Conservation Park, a 35 ha area which has quickly become one of the world’s premier dive sites. The Brisbane is covered with hard and soft corals and more than 200 species of fish have been recorded so far. Large schools of pelagic fish swarm around the twin chimney stacks. The ex-HMAS BRISBANE is the largest diveable wreck in Queensland.  http://www.derm.qld.gov.au/parks/ex-hmas-brisbane/culture.html

On August 28 2006, the HMAS Brisbane Mast Memorial was dedicated in a ceremony at The Bluff, Alexandra Headland and a full copy of the dedication address can be found here.

The 90yr old palm tree in Trotter Park commemorates the life of Reg Hooper who was killed in World War One.  In one of his letters home, Private Hooper considered that he was “one of the lucky ones chosen to meet the Turks” but having survived Gallipoli he later died in France.  His family planted the tree at their home in Woombye in 1924, and moved it to their “seachange” Alexandra Headland residence in Alice Street in 1926.  It was moved to its current location in Trotter Park with assistance of Maroochy Council in 1972.  It is appropriately located as this park also remembers the service of the 22nd Battalion (South Gippsland Regiment) who camped here during WWII in 1942 prior to embarking for Papua New Guinea.

This memorial remembers all Australian and UN personnel who saw Active Service  (1950-53) or undertook Peacekeeping  (1953-56) duties during the Korean War (1950-57).  The memorial was designed and constructed by the Sunshine Coast Chapter of the Korean War Veterans Assoc Inc, and unusually for memorials in our Shire,  the plaques remember those who returned from the war and subsequently died.  It was funded by a DPA  grant and assistance from Maroochy RSL, Maroochydore Council, and Mr Alex Somylay M.P. and dedicated on the 25 June 2000.

The central memorial rock was gifted to KVWA by the Korean Army and sent by ship for the dedication by Col Sam Gon Kim of the South Korean Army.   The rock itself is a symbol of the words used to describe their fellow comrades in arms the “ROKS” – for the Republic of Korea army.

A service is held at the memorial each Anzac Day around 11a.m.  KVWA