Idyllically situated right on the water, Alex Skate Park was originally opened in 1995 but this popular venue was rebuilt in 2017 at a cost of $1.2 million.The skate park was funded through Sunshine Coast Council’s Capital Works Program and the Queensland Government Department of National Parks, Sport and Recreation contributed $347,000 through its Get Playing Plus Program. 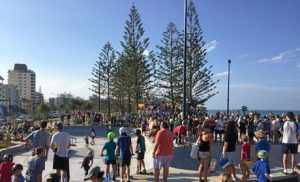 Placed as part of the Q150 Celebrations in 2009, this project was developed by the Surveyors and Spatial Sciences Institute to honour Queensland’s early explorers who were often surveyors.

It is dedicated to William Pettigrew who explored and mapped the coast north of Moreton Bay to the mouth of the Mary River. He also established a sawmill on the banks of the Maroochy River and ran a shipping business and built a wharf and depot at Mooloolaba.

The cultural highlight of Nelson Park is a magnificent 1.5 tonne forged bronze sculpture on a stainless steel support unveiled in 2008. Entitled “SISTERS BY CHOICE” it is strategically placed on an island in the lake and is perhaps a swan song to the Maroochy Shire who initiated the project with their Chinese sister city Xiamen, prior to amalgamation of the local councils.  It features a black swan (the emblem of Maroochy) and an egret (the emblem of Xiamen) taking off in flight. Kenilworth artists Elli Schlunke and Tony Reay were responsible for the concept and design and it was constructed by Chinese artist Min Yi Ming.  The first version of the sculpture was unveiled in 2007 in Xiamen.

Elizabeth Poole’s  “The Siren” at Sounion

In the grounds of Sounion at 246 Alexandra Parade is a large three dimensional sculpture which was designed and made by the artist Elizabeth Poole in 1973.  It was hand carved from a huge block of styrene, and covered with mixed fibreglass and cement and represents the figure of a lady in the centre, with extended wings on each side (designed so that children could slide down the wings)

Architect Gabriel Poole designed the building on the property and named it after a Greek Island, so Elizabeth Poole chose the story of the Sirens in Greek mythology (Homer’s Odyssey) as the inspiration for the sculpture. “Odysseus was warned about the Sirens who lured boats onto the rocks with their songs”, and this sculpture is appropriately situated above the rocks on the Bluff.  It is often mistakenly referred to as being of a mermaid.  Originally the sculpture was produced in a natural state, but it has been variously painted over the years, from brown to blue and now beige, and it is a familiar landmark to those who walk the Headland.  Maybe you will look at it in a different light now!